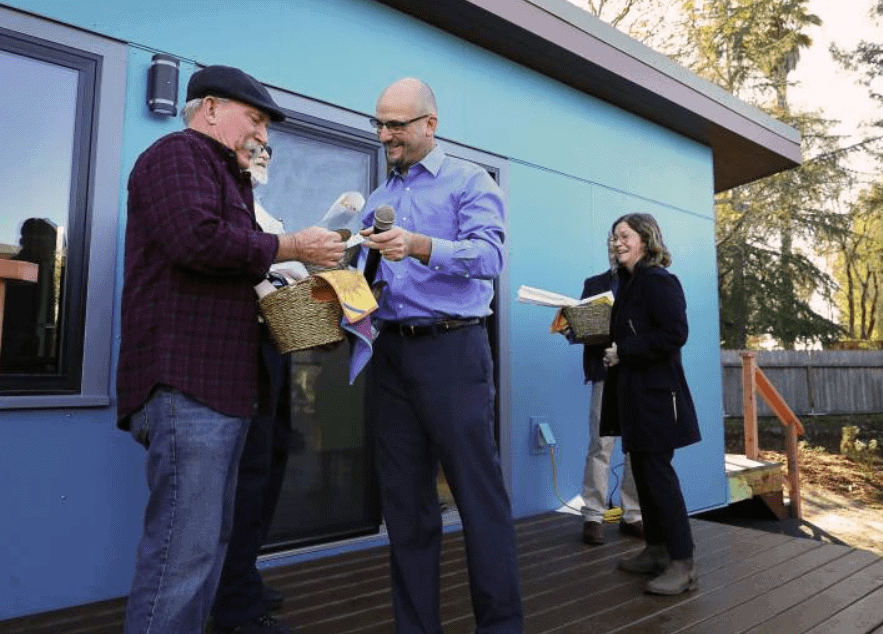 Wildfire survivors move into village of small homes in Windsor

The keys to five brand new little homes were grasped by survivors of the 2017 firestorms at a celebration Thursday in Windsor that praised the manufactured cottages as essential additions to the local housing scene — additions that really must multiply.

Guests of the “welcome home” ceremony on a Old Redwood Highway plot of land owned by Barbara Reynolds spoke of imagining 15 or 20 or more of the cottages — at 480 square feet, less than a fifth the size of the typical U.S. home — appearing on bare land across Sonoma County.

“What I hope comes of this, more than anything,” said Reynolds, “is that we can serve as an example to the community.”

It doesn’t take large tracts of land to replicate the concept and create meaningful new clusters of homes, she said. The parcel that Reynolds owns and made available for a temporary settlement for people affected by last year’s Sonoma-Napa fires is just 2.3 acres. She had two rental houses on the property when the firestorms stuck. They were unscathed.

Moved by the plight of displaced residents elsewhere, many of them elderly, the retired Memorial Hospital nurse obtained permission from the Town of Windsor in January to allow fire evacuees to bring seven recreational vehicles onto her land.

Members of Homes for Sonoma, a volunteer-led coalition of community nonprofits, businesses and individuals, read of her plans for a small, temporary RV park. They asked if she’d consider having cottages on the property.

Reynolds embraced the idea. There was born a mission to rally the public and private partners to do something profound and original: gather the necessary permits and resources and create a critically needed mini-village of mini-homes.

“You cannot believe how much it takes to make something simple like this happen,” Jane Hamilton, executive director of Rebuilding Together Petaluma, told the crowd at the reception, standing on the wooden deck of one of the five attractive manufactured homes.

Several speakers singled out Windsor for praise, saying the small homes would not be there and ready for move-in this weekend were it not for the town’s dedication to making the project happen.

While Windsor didn’t lose a single structure to the October 2017 fires, the town was the county’s first municipality to expedite construction through an emergency housing ordinance, Windsor Mayor Dominic Foppoli said.

“Welcome to Windsor,” he told the tenants who came to sign their lease agreements and claim their keys.

The residents will pay $950 a month for the one-bedroom, one-bathroom, all-electric, movable cottages, which will be managed by the nonprofit Burbank Housing.

The agreement with the city allows the homes to remain on Reynolds’ property for up to five years. The founding tenants will have an option to purchase their cottages and move them.

Robert Pierce, 75, a photographer moving into one of the cottages, was living in a camper trailer when the wildfires struck. His camper was not damaged, but he lost all of the cameras and other possessions he had in a Hopper Avenue storage unit that burned.

Pierce had moved his trailer onto Reynold’s land when the decision was made to place manufactured mini-homes on the property. Thrilled that he’ll move into one of them this weekend, Pierce said, “Basically, Barbara Reynolds is the star of this show.”

Also there Thursday to sign his lease and pick up his key was Michael O’Brien, who along with his wife, Lynette, operated the Cricklewood steakhouse on Old Redwood Highway in Larkfield for more than 40 years. When the Tubbs fire incinerated the restaurant, it took also the O’Briens’ rented home upstairs.

Michael O’Brien told the celebration at the Homes for Sonoma micro-village that he’d planned to retire at age 80, buy a recreational vehicle and travel with his wife.

Also there Thursday to sign his lease and pick up his key was Michael O’Brien, who along with his wife, Lynette, operated the Cricklewood steakhouse on Old Redwood Highway in Larkfield for more than 40 years. When the Tubbs fire incinerated the restaurant, it took also the O’Briens’ rented home upstairs.

Thanks to the fire, he said, “I got retired a little early.” And he prematurely moved into an RV.

Now 75, O’Brien said he doesn’t yet know where he and his wife will go once their time is up at the temporary residential enclave on Old Redwood Highway. But they’re delighted to be moving in. “When you come from a motorhome of less than 300 square feet,” he said, “480 is spacious.”

You can reach Staff Writer Chris Smith at 707-521-5211 and chris.smith@pressdemocrat.com.